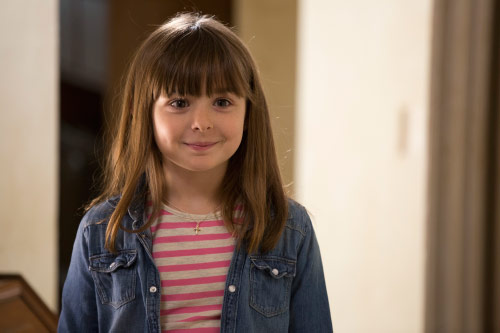 After numerous roles on television series such as Warehouse 13 as young Claudia, the iconic Canadian program The Rick Mercer Report, and a recurring roles on the ABC (Amblin Entertainment) series Lucky 7, T.J. was thrilled to be cast as Carrie, the young daughter of pastor Chris Samuels in the feature film The Masked Saint. Being the daughter of a pastor herself T.J. relished the chance draw on her own experience to help bring young Carrie to the screen. It was an incredible opportunity to work with director Warren P. Sonoda, Canadian industry great Patrick McKenna and iconic Grammy and Golden Globe winner Diahann Carroll.

Taking all that she learned from her amazing experience on the set of The Masked Saint, T.J. has since gone on to roles in television series including Rogue and the Hallmark Christmas movie Christmas at Cartwrights. She has also had the privilege of working on feature films including Adam Egoyan’s Remember in which she worked alongside industry greats Christopher Plummer and Martin Landeau as well as an upcoming role in a blockbuster film that she is really excited about but can’t share any details yet.

You can also have a chance to hear T.J. in her many voice roles including the Math Room in the award winning Odd Squad, Red Riding Hood/Wonder Red in the animated show Super Why and feature film Crimson Peak directed by Guillermo del Toro.

When not on set T.J. can be found practicing dance moves for ballet, jazz and hip-hop, hanging with friends, strumming her ukulele and singing with her big brother.