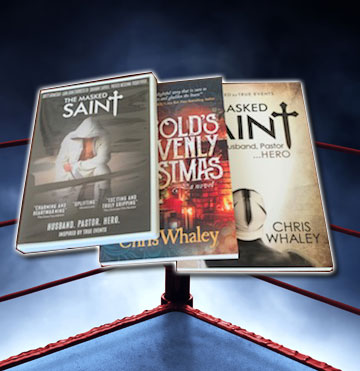 “THE MASKED SAINT” DVD – Inspired by true events in the life of former wrester and pastor Chris Whaley and based on his bestselling book, The Masked Saint (Best Picture winner at the 2015 international Christian Film Festival follows the life journey of Chris Samuels (Brett Granstaff, Vice) and his wife Lara Jean Chorostecki, After retiring from the professional wrestling ring and settling down as a small town pastor, Samuels witnesses rampant crime and serious problems in the community. Tapping into his past, the Pastor decides to moonlight as a masked vigilante fighting injustice.

When crises hit at home and the church, the do-gooder must evade the police and somehow reconcile his secret, violent identity with his calling as a preacher Starring Brett Granstaff (Vice), Lara Jean Chorostecki (Designated Survivor), Patrick McKenna (Red Green), Diahann Carroll (Grey’s Anatomy) and “Rowdy” Roddy Piper. Run Time: 1 hr 45 min PG-13 for some violence and thematic elements. Special features include Behind the Scenes, never before seen Cast and Crew Interviews and the official theme song.

“HAROLD’S HEAVENLY CHRISTMAS” Book is a Christmas story that is relatable and heart-warming while presenting the hopefulness of miracles. Harold was a firefighter who passed away in an emergency room. Now, he is a heavenly ambassador helping a couple of people on earth. Some of those who Harold is helping include Arnold Glassman, an executive who is diagnosed with terminal cancer, and Bret Davidson is a man who continually has one bad experience after another.

“THE MASKED SAINT” BOOK – Professional wrestler turned Baptist pastor turned vigilante superhero: A rousing, inspiring novel based on true events and made into an award-winning film.

In the ring, Florida’s Chris Samuel is known as The Gladiator. Until a calling urges him to uproot his wife and two daughters and take up more spiritual challenges in theology. Yet the battles he won as a deathmatch champ are minor compared to those he must overcome at his struggling new church in Fort Worth, Texas: an overbearing congregant, failing attendance, much-needed repairs, and mounting bills. Then he meets Miss Edna, an elderly fan—of God and the Gladiator—who encourages Chris to go back to mat. After all, it could save his church from financial ruin. But when he stumbles upon a brutal fight in a seedy side of town, Chris’s blessed body slamming skills save the night. Donning his mask and tights, the good pastor is determined to take out the bad guys., as his crime-fighting avenger The Saint makes headlines, Chris must reconcile his fearless secret identity with his real mission in life. And it’ll take his faith, his family and Miss Edna to remind him about grace, goodness and the truth.