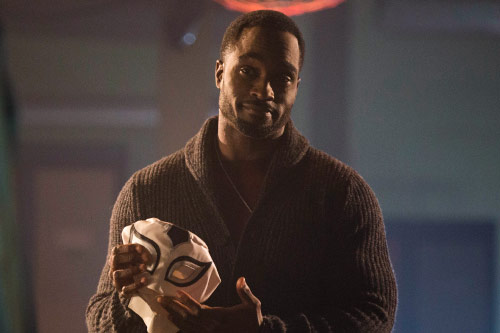 Mykel Shannon Jenkins, born in Biloxi, Mississippi, to an officer in the United States Air Force, traveled with his family across the United States. With his parents and two siblings, Mykel finally settled in New Orleans, Louisiana, where he graduated from Bonnabel High School and, thereafter, earned a bachelor’s degree from Loyola University. While in high school, Mykel was a nationalist in drama and speech & debate. It was at this time that his fire for the dramatic was ignited. After college, while holding down a part-time job as a waiter, Mykel became a household name as the host of New Orleans’ WB38 Kids’ Club, where for more than four years he served as an on-air personality introducing kids and parents to a world of knowledge. While in New Orleans, Mykel landed many roles, including one that earned him screen time with Tommy Lee Jones and Ashley Judd in Double Jeopardy.

Lead by his faith in Christ, armored with a winning attitude and empowered by his family, Mykel made his move to Hollywood and immediately began studying his craft with Gary Imhoff at the Beverly Hills Playhouse. Still developing his craft, Mykel currently studies under acting coaches Lesly Kahn, Gary Imhoff and Eric Stewart. Since moving to Hollywood, Mykel has landed leads in many highly regarded television shows, such as Charmed, Ugly Betty, Saving Grace, CSI: Miami, CSI: New York, The Good Guys, and Hit The Floor. Mykel’s film credits include The Saint, Behind Enemy Lines II, Lucky You, Chicago 8, The Last Heist, and Undisputed III: Redemption, where he brought to life the charismatic and unforgettable American fighter, Turbo. Mykel has been working on two of his own film projects called Off The Grid and The Gods, wherein Mykel produces, directs and stars.

Although Mykel is quite busy fine tuning his acting skills, he still finds time to train physically as well as spiritually. In his spare time, as a certified personal trainer, Mykel knows what it takes to maintain a healthy body, i.e., hard work and discipline. He enjoys training others because he is able to assist in more than just the physical development, but in spiritual and mental growth of others as well. Mykel enjoys watching movies, playing softball, bowling and creative writing. At the close of his busy day, Mykel finds time to play his two favorite roles, a devoted father and husband, with tremendous patience, understanding and love.