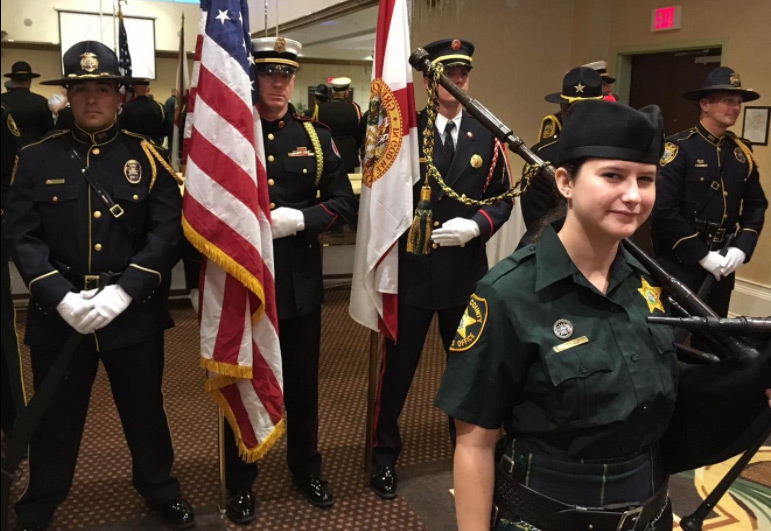 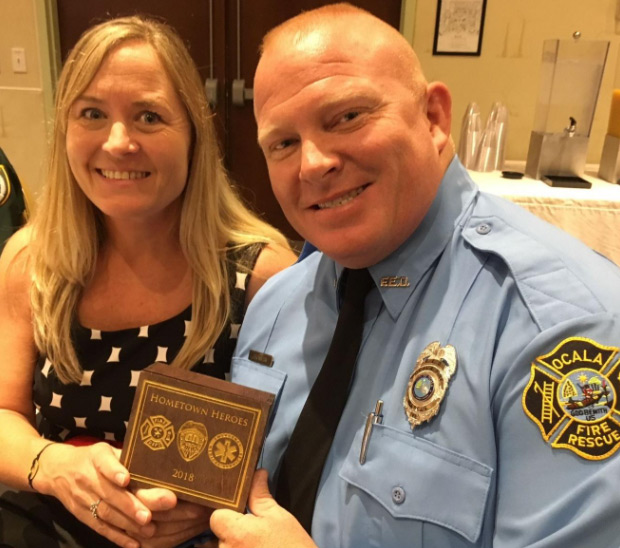 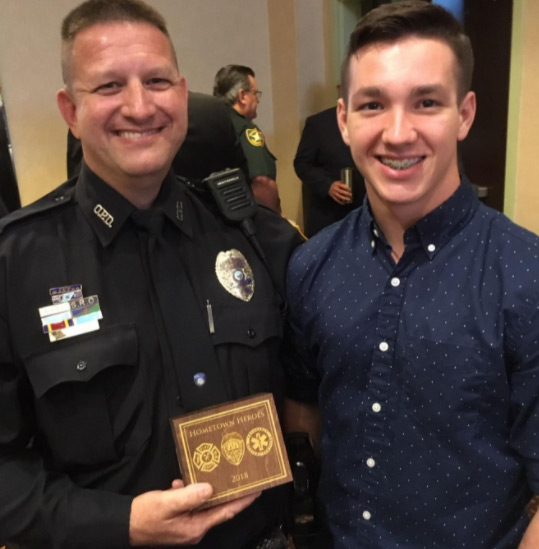 Members of law enforcement and fire and rescue services from Marion, Alachua, Lake, Levy, Sumter and Citrus counties were honored Friday and several were singled out for special recognition during the inaugural Hometown Heroes Recognition Breakfast, held in southwest Ocala.

Officer Robert Gravel of the Ocala Police Department, for example, was one of those cited. He was given the 2018 Hometown Hero Award for School Resource Officer.

On Aug. 22, Gravel, the resource officer at West Port High School, got word about a student who had a gun in his backpack. He found the student and took a .380 handgun from the backpack.

“I’m humbled by the award. It was a team effort and I wish all members of the team could receive the award,” said Gravel, as his son, Robert Gravel Jr. looked on.

His son was at the school the day of the incident.

Those cited for acts “above and beyond” their duties will have their names engraved on a trophy display that will be circulated around each county courthouse. Additional names will be added in years to come, after each annual event.

There were a number of municipal and elected officials at the event. Rep. Daniel Webster told the group he was “thankful” for first responders who “put their lives for me and others in the community.”

Keynote speaker Rev. Chris Whaley, pastor of First Baptist Church of Orlando and chaplain for the Seminole County Fire Department, said first responders were the “tip of the spear” and would “run into burning buildings to save lives.”

Whaley told the group several stories based on his experiences as a pro wrestler nicknamed the “Masked Saint,” like the time he wrestled the “Undertaker” as his family watched from the audience “crying.”

A moment of silence for fallen members of law enforcement and firefighters was called for by moderator Joe Martone.

In addition to Gravel, the 2018 Hometown Heroes were:

• Marion County Sheriff’s Office, K-9 Deputy Jeremy Nix: On May 9, while headed home, Nix was stopped by a mother whose 4 month old son was “completely unresponsive.” Nix started life saving attempts and rushed baby Kingston to a local hospital. The boy has since made a full recovery.

• Marion County Fire Rescue, Capt. Pam Driggers and Lt. Stephen Johnson: Driggers, a 24-year veteran who has served with Special Operation Technical Rescue, was cited for her work as an instructor, with honor guards and the Explorer program. Johnson was honored for 18 years as a firefighter/EMT/paramedic and being an “ardent supporter” of the Phoenix Society for burn victims. On Jan. 30, he commanded the scene of a car crash in which a 14-year-old girl was impaled by part of a fence. His command at the scene was “critical” to the girl’s survival, the citation states.

• Alachua County Sheriff’s Office, Jeff Fricker: On June 21, Fricker responded to a man armed with a knife and threatening to kill a doctor at Meridian Behavioral Health. Fricker eventually convinced the man to drop the knife and seek help.

• Alachua County Fire Rescue, Capt. Joseph Malphurs, Lt. Steven Jarvis and Firefighter Mark Finlay: The three men spotted a burning car while returning from a call and before donning bunker gear rushed to save an adult and three children who were severely injured.

• Citrus County Sheriff’s Office, Deputies Ethan Vanscoy, Russell Howard and David Elias: The three deputies responded May 6 to a reported suicide by hanging. Two deputies lifted the body while the other deputy freed the person, who survived.

• Citrus County Fire Rescue, Lt. Colin Brunner, Driver Engineer Matthew Green, Capt. Kevin Stone and Chief Paul Gillum: They saved the life of a chest pain victim by providing CPR and use of an AED on May 14.

• Lake County Sheriff’s office, Deputy Austin Pringle: Pringle was walking along a road questioning a suspect on July 4 when a car struck the duo. The suspect, who received super-critical wounds, claimed Pringle, who was “substantially hurt,” tried to shove him to safety.

• Levy County Sheriff’s Office, Lt. Jimmy Anderson: Anderson spent four hours in verbal negotiations with an armed suspect and avoided injures in a situation in which the man used his grandmother as a human shield.

• Levy County Fire Rescue, EMT Firefighter Shenard Blake: Blake was recognized for his hard work and “extreme pride” in his profession and acting as a “role model.”

• Sumter County Sheriff’s Office, Lt. Robert Capps and Deputy Matt Reeves: Capps and Reeves responded to a domestic call and found a man had shot a dog and at a vehicle and still walking in the neighborhood “firing his weapon at random.” When confronted, the man “aimed his gun” at the deputies and they fired and the man suffered fatal injuries.

• Ocala Police Department, Officer Joshua Warner, Shelby O’Grady and Communications Technician Lauren Pozdol: The three were involved in handling a call for service to help with no pulse. The call taker gave instructions to start CPR, officers provided CPR and applied an AED, and the victim is recovering.

• Belleview Police Department, Cpl. Michael Miley: After Miley handled a bicycle theft call, he purchased the child a new bike with his own money. He has started a “random act of kindness” program and buys pizza and ice treats for kids in the city, He has been through the DARE instructor program and was recently chosen as the first school resource officer for Belleview High School.

Gary Gratz, 37, with Lake County Fire Rescue, was at the event with his wife Samantha and their son, Logan, 3.

“He lives it and breathes it,” Samantha Gratz said about her husband’s devotion to his calling.