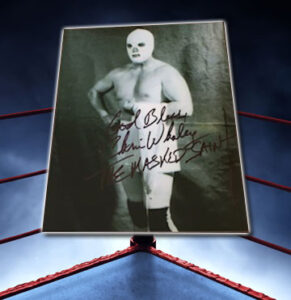 “The Masked Saint,” a faith-based action movie opening Friday, is based on Orlando pastor Chris Whaley’s novel but described as inspired by true events.

So how close is the movie to Whaley’s own story?

“Each chapter is built upon something that actually happened in my life,” said Whaley, 61. “Do I put on a mask and go out at night and beat people up? No, I didn’t do that.”

But Whaley, who is now at First Baptist Orlando, did wrestle. Starting in 1978, he donned a mask, trunks, tights, cape and boots – all white – and became the Saint. The mask helped cloak his identity so no one at church would know he was moonlighting.

Being a wrestler for a decade was far easier than being a pastor, he said.

“The most stressful thing I’ve ever done in my life is being a pastor,” said Whaley, who served at First Baptist Longwood for nearly 14 years. “I had no stress when I was a wrestler. You get to work that out. But as a pastor, you’re constantly dealing with people who don’t like you,” he said.

The movie reflects those tensions as young pastor Chris (Brett Granstaff) serves a depleted and feuding congregation. The real Chris wrestled and preached in Florida. The movie, which filmed in Canada, shifts the action to Michigan.

Yet Whaley praises the movie and says his book’s central idea comes through, furnished by Miss Edna (Diahann Carroll) and an Edmund Burke quote: “The only thing necessary for the triumph of evil is for good men to do nothing.”

“The real Miss Edna was from my childhood, and she gave me that quote and I never forgot it,” Whaley said. “Each chapter of the book has a lesson I learned from her. That had to do with helping people … being an influence in people’s lives in the right way.”

The movie explores how Chris, though he may be the Masked Saint, stumbles over pride. “I’ve had my moments of pride,” Whaley said. “But God has a great way of humbling you, and I’ve been humbled several times in my ministry.” He describes himself as “a terrible administrator.”

Whaley’s feelings about bullies come through when the movie Chris helps a young woman being beaten by her husband. The script echoes a situation that Whaley found as a young pastor.

“Bullies just disgust me. Bullies only pick on people they know they can beat up — that always infuriates me,” he said.
The film depicts a wrestler breaking Chris’ leg, and that did happen in real life. Whaley, who was last in the ring in 1993 for a charity event, lists his ailments: five knee surgeries, crushed ankle, cracked sternum and collarbones, neck injuries, concussions, broken nose, surgically repaired shoulders, hearing loss from being banged in the ear, dislocated hips that can come out when he drives.

He’s not complaining. “It was well worth it. I loved it. I would do it again,” he said.

Wrestling helped his ministry “tremendously,” he said, because he’s not easily intimidated. “I didn’t roll over and die,” he said. “I kept getting up every time I was knocked down. I’m very thankful for that. It gave me a lot of illustrations for sermons.”

Whaley is writing “The Masked Saint 2.” He said he’s most proud of his “two wonderful daughters,” ages 36 and 33, from his 40-year marriage. He praises the movie for depicting his thoughts forcefully.
“We should be standing up for people, not standing on the sidelines,” Whaley said. “Too often I think we stand on the sidelines and we watch things take place and we don’t do anything. We serve the God of the second chance and a third chance and a fourth chance. I’m a recipient of that. I thank God that he sent me another chance so many times.

“We have people who do not darken the door of the church who think you’ve got to be perfect to go to church. I hope they see that and say, ‘There’s hope for me. If a pastor can be forgiven, then I can be forgiven, too.'”