Sudbury Cinefest: From preacher to vigilante 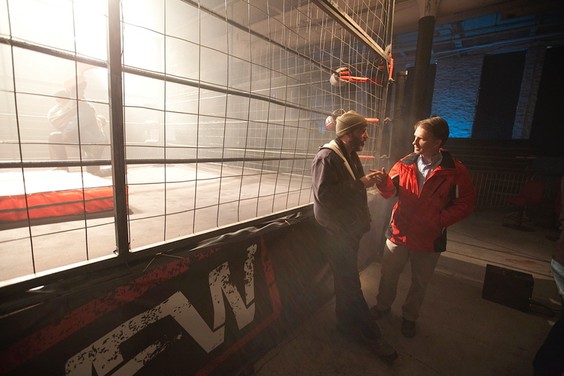 When Cliff McDowell read the book The Masked Saint a few years ago, he realized he had much more in common with the main character than he imagined.

The story of Chris Samuels, a professional wrestler who becomes a small town Baptist pastor and moonlights as a masked vigilante fighting injustice, is based on real-life experiences of first-time author and pro-wrestler turned pastor from southern Florida, Chris Whaley.

McDowell a devout Christian was at first hesitant about the premise of the story and justifying vigilantism by a man of faith.

“But then when I read through the book and met with the pastor, I thought, this was just like my life,” said McDowell, a Sault Ste, Marie native and film producer based in Toronto.

“I spoke to the pastor and realized we have a lot of similarities. When I flew down and met with him and his family in Florida, I thought, ‘oh my goodness, I need to do this.’” He was compelled to turn the book into a film.

When McDowell first became a Christian, he attended a downtown Toronto church, where he says he saw a lot of injustice going on and always felt he had to hold himself back from intervening. Whaley told him a story where he did intervene, in a church parking lot where he witnessed a man beating a pregnant woman. Whaley started running toward the aggravator, blacked out and the next thing he knew, his daughter was yelling at him to get his knee off the man’s throat.

McDowell was in the military for seven years and called himself a “scrapper” before he became a Christian.

McDowell has produced many family and faith-based films under his company P23 Entertainment, so transforming The Masked Saint into a movie fit into his genre of films.

The Masked Saint was filmed last October at various locations in Sault Ste. Marie, like the First Baptist Church.

“The deal was that I had to preach a sermon to get the church,” said McDowell.

“I actually preached two Sundays there.”

The Masked Saint is a faith-based film, but will appeal to wrestling fans, too.

“The film has a great crossover,” said McDowell. “It’s not a preachy type of film.”

Many Northern film professionals were involved in the making of the movie.

David Anselmo of Northern Ontario Film Studios co-produced the film, while Peter Mihaichuk did production design and Michael Cerenzie, another Sault Ste Marie native who is now a sought-after Hollywood producer, is the executive producer.

Tonight marks the world premiere of The Masked Saint, with many of the cast and major players expected to attend the 7 p.m. gala presentation.

“It’s always great to have the opportunity to take a film back home up north,” he said.

The film stars Brett Granstaff as Chris Samuels, who did all of the on-screen wrestling stunts and co-wrote the film, Lara Jean Chorostecki, T.J. McGibbon, Patrick McKenna and Roddy Piper.

McDowell has the rights to the story and said that “if all goes well” he’d like to do a sequel or television series.