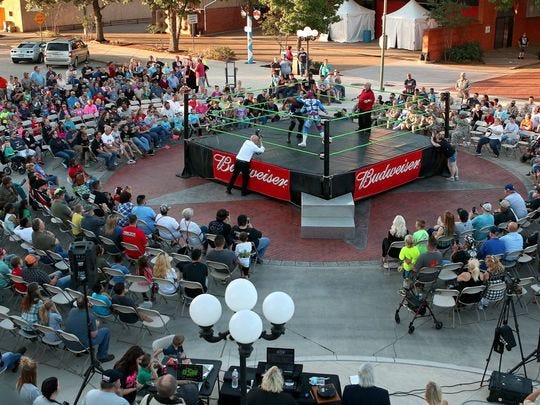 The weekend opened Thursday night with a showing of “The Masked Saint” at Highland Heights Baptist Church and was based on former wrestler Chris Whaley’s (The Saint) novel with a Q&A with the Baptist minister.

The festivities continue tonight at 6:30 p.m. in front of the museum with Wrestling Under the Stars IV, after the event was held in the Big Blue parking garage in 2018 after rain in 2017. If there is rain, Mantell said they will be back in the parking garage.

The doors open at 5:30 p.m., and the bell is at 6:30 p.m. Admission is $5. “With ticket prices like that,” he said, “We’d have everyone in town here. The tickets will be on sale at the museum and at the door. There will be 1,000 seats around ringside and seating is first come first serve.”

The evening is a triple main event. “We just added an over the top rope Battle Royale royal rumble match with I think 30 entrants.” There will be four or five start in the ring and then every 30 seconds another will be announced who will then enter the ring. “That Battle Royale will either be the first or the last match of the night.